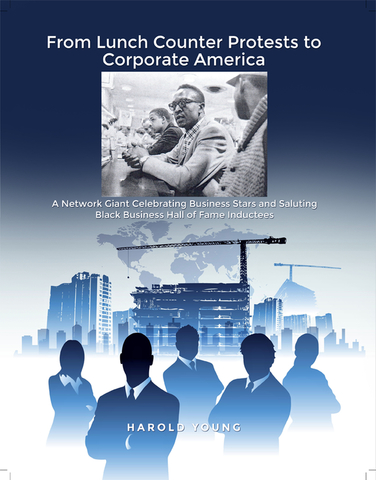 From Lunch Counter Protests to Corporate America, a new book by Harold D. Young, has been released by Dorrance Publishing Co., Inc.

Social justice demonstrations of many black college students during the 1950s and 1960s created the passion for this book. Protesting for access to public accommodations and equal employment opportunities thus inspired From Lunch Counter Protests to Corporate America. This book chronicles the activities of the Baltimore Marketing Association, Inc. The mission of BMA was to support black professionals in the early to mid-sixties who were among the first black men and women in America hired by major corporations.

As the organization grew, its leadership became more entrenched in community activities, and its mission expanded and annually BMA members recognized that there was a wellspring of businessmen and businesswomen who were making significant contributions in their communities. Most of these businesses were established without conspicuous fanfare or proclamations, but rather they were built through smart investments and relationships with other businesses and community leaders. The story of these black businesspersons must be told, repeatedly, until the truth of their successes is fully understood and appreciated.

Harold D. Young was Office Manager at Commercial Credit Corporation for four years. He later worked at the U.S. Department of Housing and Urban Development for thirty-one years. He was head of the Baltimore office of HUD from 1995 to 2004 where he worked in communities throughout Maryland. Young also worked thirty years as a private attorney, representing clients in matters of real estate, family law, and government. He is a graduate of the University of Baltimore School of Law and a member of the Maryland State Bar Association. Young holds a Bachelor of Arts degree in Economics from Virginia State University and a Master of Arts in Urban Planning from Morgan State University. He served as an adjunct professor at Morgan State University and lectured at area colleges and universities. Young and his wife have two children and four grandchildren.

From Lunch Counter Protests to Corporate America is a 156-page hardcover with a retail price of $25.00 (eBook $20.00). The ISBN is 978-1-6491-3214-7. It was published by Dorrance Publishing Co., Inc of Pittsburgh, Pennsylvania. For members of the press, to request a review copy, visit our virtual pressroom at http://dorrancepressroom.com or to buy the book visit our online bookstore at https://bookstore.dorrancepublishing.com/from-lunch-counter-protests-to-corporate-america-a-networking-giant-celebrating-business-stars-and-saluting-black-business-hall-of-fame-inductees/